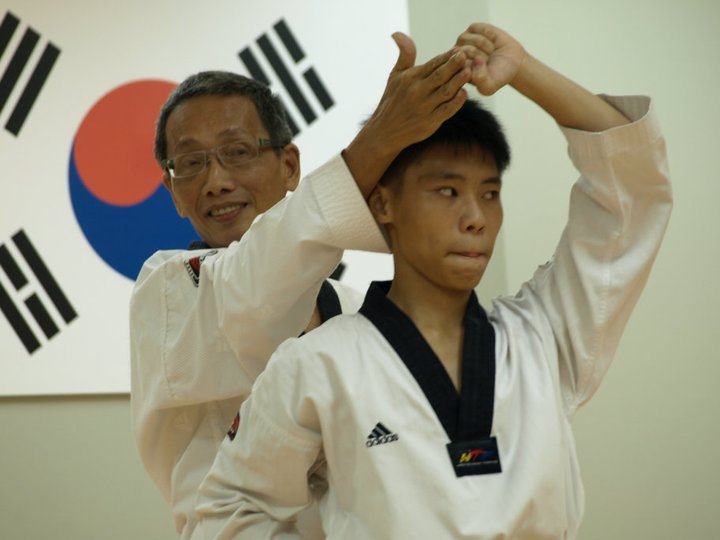 INDUK Taekwondo was recently honored by a two-hour training seminar by 9th Dan, Singapore Taekwondo Federation's General Manager, Lim Teong Chin. Master Lim mesmerized students by his light hearted and yet informative session on the various movement in Taekwondo. Explaining the significance of simple steps, Master Lim made the most fundamental “cha ryot” stance intriguing – the correct posture and proportion of the fist to the body whilst mundane to the experience practitioner – gives an all important first impression. Even the all necessary “shout” at the end of each pattern was important to demonstrate the “Qi” in all Taekwondo exponents.

The two-hour training session was interlaced with informative explanation of the significance of being precise in the various Poomsae steps. Why a 30% rotation of the shoulder forward in a punch provides maximum impact and the necessity to synchronize the rotation of both hands at the last moment of a step were only some of his points shared.

Master Lim quipped that a Taekwondo punch, kick or block is not only effective but beautiful if executed with precision. Said Master Lim “Taekwondo is beautiful like ballroom dancing, like Waltz, but with only this difference – it has power”.

Master Lim was accompanied by Rui Jie, Singapore’s National Poomsae representative at the World Poomsae competition at Uzbekistan. Demonstrating first a “yellow belt” pattern followed by a “black belt” pattern, Rui Jie showed what looked like a perfect execution and then repeated step by step in slow motion allowing Master Lim to give an explanation on the steps. Students of all belts were then instructed to execute the steps with Master Lim and Rui Jie offering advice.

The seminar ended with students wanting more. Master Lim commended INDUK Taekwondo’s Principal Instructor, Lee Seung Man, stating that INDUK has one of the best instructors and was in good hands under Principal Lee's guidance. Principal Instructor Lee he said, was open to new ideas and improvement and ready to evolve with Taekwondo as the premier martial art form of the world.